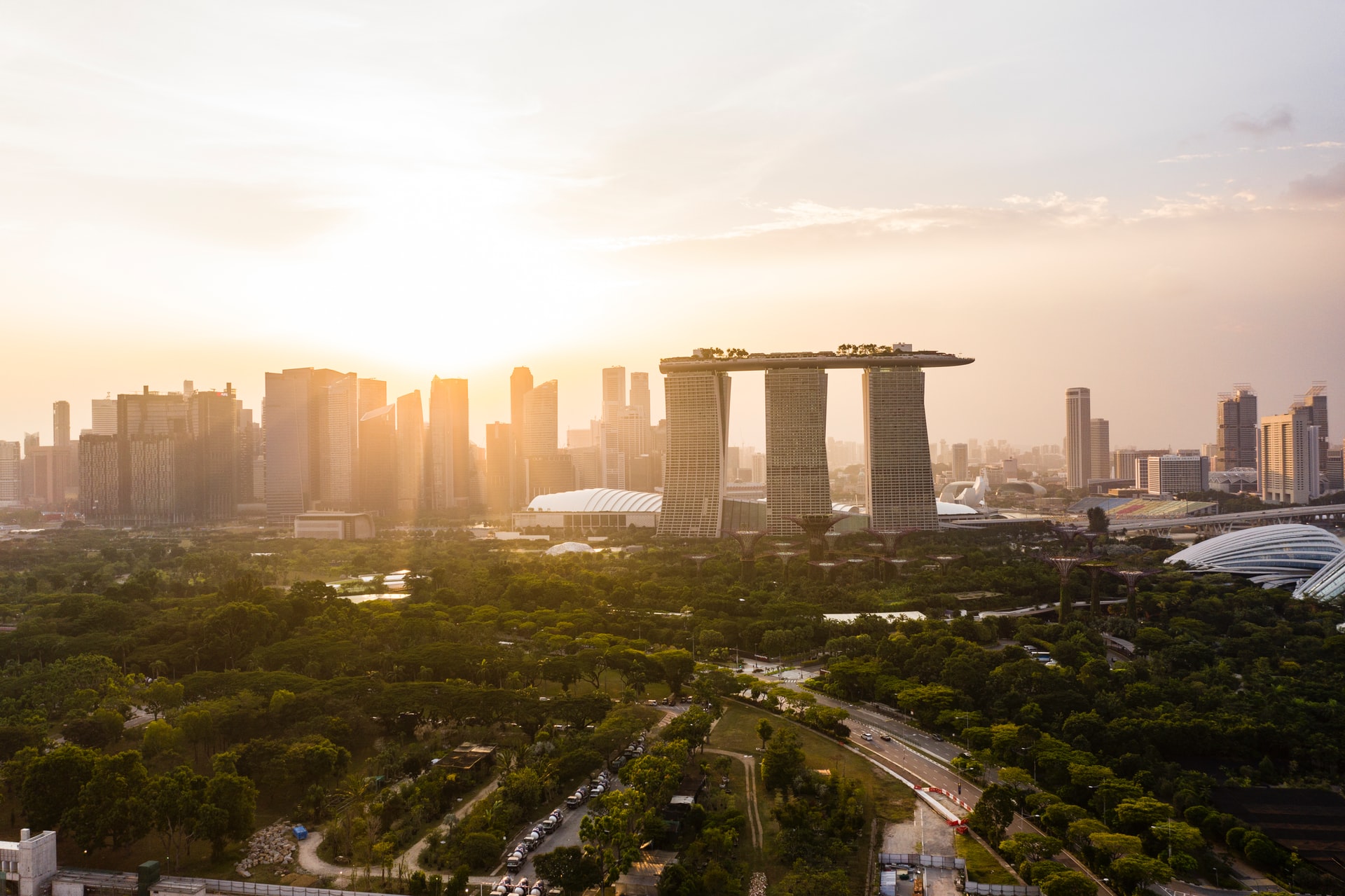 Rapid urbanisation is characteristic of most developed and developing countries. While cities can be hubs of creativity and catalysts for ‘green’ solutions, how do we reconcile the benefits of urbanisation with its effects on climate change?

Urbanisation yields development. It encourages economic growth, boosts labour productivity, fuels technical and industrial innovation and increases people’s access to healthcare, education and public services. Cities can bustle with activity and function as creative hubs across all economic sectors, thus generating solutions and cross-fertilising ideas. Urbanisation can also contribute to environmental degradation, climate change, loss of natural habitats for many species, as well as deterioration of living conditions for the underserved population. The link between urbanisation and climate runs both ways. Cities contribute to climate change and are responsible for 75% of global carbon emissions and make up 70% of the world’s energy consumption. Urban areas account for over 67% of energy-related greenhouse gas emissions as approximately 72% of their energy demands are currently being met by coal, oil and natural gas, and generate a per capita global average of over 1.5kg/day of waste. Cities also feel the direct impacts of climate change. They trap heat while rising temperatures see the emergence of urban ‘heat islands’ and the deterioration of air quality, which can exacerbate the severity of diseases, generate further social and health emergencies, and put a strain on existing infrastructure. Cities also limit drainage, as the over-development of ‘unsustainable’ infrastructure can lead to soil sealing and raises the risks of floods. With the urban population is set to reach 9 billion by 2050, the nexus between cities and climate change calls for impactful solutions that balance the value of urbanisation with the urgency to adapt effectively, cost-efficiently and in aesthetically pleasing ways to the effects of climate change.

Urban adaptation refers to the process of adapting cities and urban areas to climate change both in preventive and protective terms. There are a variety of methods in which this can occur, including developing blue and green spaces, electric transportation, and building climate resilient infrastructure. In Milan, architect Stefano Boeri pioneered the establishment of vertical gardens, where two apartment buildings in the heart of the city housed 21,000 plants and 20 species of birds. The incorporation of trees and plant life in urban architecture addresses the buildup of carbon dioxide emissions in cities as trees absorb the carbon dioxide and convert it into oxygen.  Trees also cool the environment, thus providing some protection in hot months and can assist in urban management of surface temperature. In 2017, Boeri revealed his plans to take this idea over to China’. The city of Liuzhou in southern China will embark on the development of a ‘forest city’: a 342-acre neighbourhood aimed at absorbing almost 10,000 tonnes of carbon dioxide and 57 tones of pollutants per year whilst accommodating 30,000 people and over 70 buildings, all of which to be covered with 40,000 trees and around a million plants. In Droten, Netherlands, the first large-scale commercial vertical farm was built in 2017. Vertical farming keeps production within the area of consumption, in cities, thus reducing transport-related costs and emissions, as well as ensuring localised self-sustainability, which in turn can represent a valid solution for food security in other contexts. Similarly, the city of Hamburg in Germany has sought to encourage private homeowners to set up ‘green roofs‘ which would help retain excess water and delay its entry into the over-burdened sewage system. Green roofs can also support biodiversity in inner-city environments, as green patches host their own micro-ecosystem of invertebrates, pollinators and birds. Also, in an attempt to build more climate resilient infrastructure, New York City has launched a plan to strengthen flood resistance along 520 miles off the coast to better protect and prepare its vulnerable coastal neighbourhoods. This includes the provision of emergency services in the event of a flood, building seawalls and breakwaters to block flood waters and reduce the force of waves respectively, hardening infrastructure to prevent the loss of power and other vital services in the wake of a climate change disaster and finally, encouraging climate-resilient constructions.

However, the replicability of Milan’s vertical gardens, Droten’s vertical farm, Hamburg’s green roofs, and New York’s resilience plan in developing countries across the world is complex, especially given the high costs of these solutions. The vertical garden apartments, for example, are ultimately luxury apartments, costing from USD845,000 up to USD2.6 million, making them inaccessible to the average citizen. Similarly, New York’s resilience plan cost USD20 billion, thus requiring significant financial capacity at the city, regional and national levels. Developing countries often lack the financial resources necessary to kickstart these initiatives, the technical resources to research and develop solutions and the institutional resources needed to enable cooperation between national and local governments. Furthermore, with pertinent issues like poverty and infrastructure gaps, generating the political backing and community support can be incredibly difficult, thus limiting activities such as awareness-raising or resource mobilisation, which constitute fundamental aspects of urban adaptation. Amidst these challenges, how can urban adaptation schemes be implemented in the context of cities in developing countries?

Local problems need local solutions. Singapore is paving the way for urban adaptation in Southeast Asia, establishing the world’s first low-carbon, hydraulic-driven vertical farm, Sky Greens. Singapore is a densely populated urban area that imports almost 93% of its production. Sky Greens is a response to both food security and sustainable urbanisation: it produces over a ton of vegetables every other day, relies on a water-pulley system powered by rainwater and gravity to rotate the vegetable trays. This reliance on natural energy combined with the composting and reuse of all organic waste and recycling of water means that the system conserves resources in terms of energy extraction, rendering it sustainable in the long run. Most tellingly, these enterprises are not limited to the advanced cities of Asia. A number of cities across the developing world have tailored adaptive solutions to their local needs. Urban farming has gained particular traction and carries with it immense environmental and social potential. It is estimated that it could help produce almost 180 million metric tons of food a year and could help absorb around 170,000 tonnes of nitrogen and prevent 57 billion cubic meters of stormwater runoff that would otherwise end up polluting streams and rivers. Furthermore, as a type of ‘green’ infrastructure, it helps mitigate the effects of urban ‘heat islands’. Finally, the costs can also be adjusted to better suit the needs of those with less financial resources. This is important, as, despite a growing number of people migrating to urban areas, 883 million urban dwellers still live in slum-like conditions (Moreno, Urbanisation Trends, 2018). In African cities, expanding slums, poverty, unemployment and a sizable informal economy remain significant considerations when designing and implementing urban adaptation investments (Meagher, Making Inclusion More Inclusive, 2018). Versatile solutions are thus fundamental, and urban farming allows for this versatility. For example, In Kampala, Uganda, urbanisation has resulted in a scarcity of space. In response, stack farming and vertical micro-gardening efforts have been initiated. These are both financially and spatially tailored to the local needs of Kampala’s citizens. They use blocks of wood as farm units with a central vermicomposting chamber for earthworms to convert organic waste into fertiliser. One square meter can grow approximately 100 plants. Faced with similar constraints as well as food insecurity, the use of ‘sack farming’ is growing in popularity in Nairobi – an inexpensive but high-yielding food security technology. The materials are cheap and this offers the poorer segment of the population the opportunity to produce their own food sustainably, especially in the densely populated slums of the city. In Cuba, urban farming in Havana began in the late 1990s in response to the high food shortages caused by a loss of 80% of its international trade. This laid the foundations for the incremental shift towards widespread organic farming.

Investments in urban adaptation are not a prerogative of the developed world. With most of the urban growth forecast to occur in developing countries, significant climate as well as developmental benefits can be achieved through ‘green’ and ‘smart’ urbanisation. Uganda, Kenya and Cuba are all examples of the potential for sustainable innovation in urban adaptation. They also demonstrate that financial, technical and institutional barriers can be overcome through the implementation of localised small-scale measures that can better respond to the specific needs of a city and its people. Scaling up those interventions to additional urban communities or into new cities may also require additional financing. The team at Globalfields is raising blended finance to support integrated packages of technical assistance grants and investment to build and expand   the adaptive capacity of cities. With 63% of infrastructure investment set to be directed at emerging economies by 2035, we have now a unique opportunity to design new and pleasant ways to adapt to the vulnerabilities arising from climate change in urban environments.